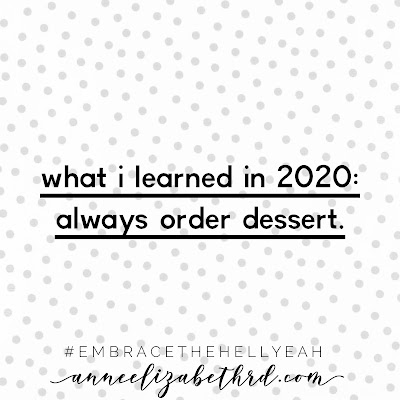 What have you learned in 2020?
2020 has been a year...
I hope you are taking time to reflect as the end is coming soon to the year. I hope you learned a few things about yourself. I hope you did something you always wanted to do but never had time. I also hope the end of the year is going to be positive and full of joy...because there is just no other way to think about it.
I have realized a variety of different things over the course of 2020 but one theme that sticks out to me is "thinking about doing something and then never doing it." I think of how many times I said I was going to do something but never followed through. Was it because of time?  Was it because I was scared?  Was it because I was lazy?
I don't want to feel the "could've- should've-would've" vibes this next year.  You know the feeling. Like a deep little pit in your stomach, reminding you there was an opportunity, but you ignored it. Similar to being asked if you want to see the dessert menu, really wanting dessert and then not ordering it.
From now on, I will always order dessert and will mostly likely eat it before the meal.
#embracethehellyeah
~AE
Posted by Anne Elizabeth at 3:00 AM