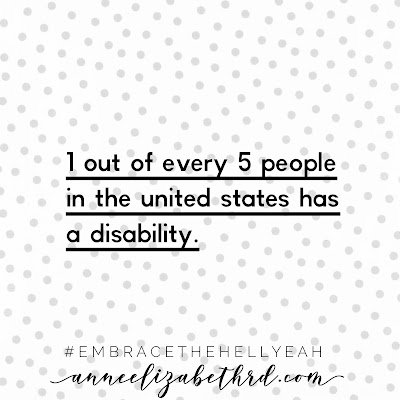 Are you familiar with the Americans with Disabilities Act of 1990?
July 26th of 2020 marked the 30th anniversary of the Americans with Disabilities Act (ADA). Something I should be aware of, but really wasn't. This happened in my lifetime, I was a freshman in high school and have no recollection of it at all. I am downright pissed at my adult self for not knowing. Which is why over the next few weeks, I am going to share some of the things I have learned.
Many injustices has been brought to light against human beings in my lifetime and I do not agree with any of them. But this one, people with disabilities, is under the radar. Where is the justice, riots and outcry for them?  This population seems to ALWAYS be overlooked and forgotten.
The groundbreaking legislation was introduced into the Senate in 1988 by Iowa Senator Tom Harkin. Why? Because his older brother Frank was deaf and he saw all the struggles his brother had, fueling his desire to help. The ADA would provide comprehensive civil rights protection for people for the first time in our nations history instead of people with disabilities being discriminated against.
Throughout history, people with disabilities have been feared, ridiculed and excluded from public places. They were not allowed in schools, denied the right to vote, pushed into institutions to live because of how they looked or acted, and even sterilized. There were barely any accommodations for in public building or transportation for adaptive equipment like wheels chairs. There was stigma, making people with disabilities a medical issue instead of a civil rights issue.
The ADA is a civil rights law that prohibits discrimination against individuals with disabilities in all areas of public life, including jobs, schools, transportation, and all public and private places that are open to the general public. The purpose of the law is to make sure that people with disabilities have the same rights and opportunities as everyone else. The ADA gives civil rights protections to individuals with disabilities similar to those provided to individuals on the basis of race, color, sex, national origin, age, and religion. It guarantees equal opportunity for individuals with disabilities in public accommodations, employment, transportation, state and local government services, and telecommunications. The ADA is divided into five titles (or sections) that relate to different areas of public life -  and these are just the basics.
Did you know 1 in every 5 people in the United States has a disability?
#embracethehellyeah
~AE
Posted by Anne Elizabeth at 3:00 AM No comments:

"Do Things Your Way" Weekly Wisdom 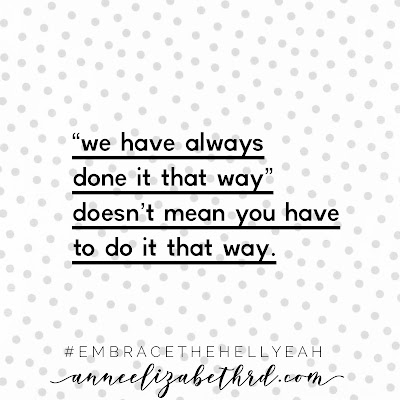 When was the last time you changed something in your routine?
The last time was when I changed my laundry detergent. I have always gotten the same laundry detergent my parents got, because they are older and wiser and that's what a daughter does. Until the daughter doesn't anymore and navigates her own way and wants to try something different. I am a creature of habit and have taken all the nuggets of wisdom from my parents and applied them to my own life. Makes sense right?  They have lived longer than me and know more than I do.  But what if I did something different or tried to do something my own way?  Would they be mad?  Will it fail?  Will I fail?
Just because things are always done a certain way, doesn't mean you can't question it and try out something new. It can be scary, the unknown always is but it can be exciting. I think 2020 has proved to us all that things don't always have to be done the same way and it is scary and it is exciting. We are not doing anything the same way, socializing, shopping, vacationing - everything is different. So why not look at everything going on in your life?
Changing things up is good!  I know I am a creature of habit and have found making little tweaks in my routine has resulted in improvements. I am saving time, saving money and eliminating excess steps or things I don't really need. I am realizing just because I have always done things a certain way doesn't mean it has to stay this way - and it applies to all areas in my life. My home, my work, my relationships have all benefitted by mixing things up. There have been some failures of course, but I can go back to what worked before. No big deal!  I wouldn't have known unless I tried.
By all means, stick to things that are working for you but don't be afraid to try it a different way. It is what makes your life yours and yourself uniquely you.
#embracethehellyeah
~AE
Posted by Anne Elizabeth at 3:00 AM No comments: 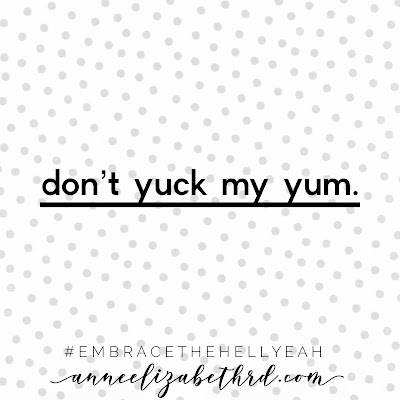 How many times have you said something negative about food?
I love food and I know I have said "yuck" numerous times in my life. It wasn't until I started doing a nutrition program for elementary children called "Pick A Better Snack" did I realize this is a really ugly word. Each month during the school year, I go into a local elementary school and discuss a certain fruit or vegetable with all classes grade K through 3rd. I talk about the origins of the produce item, how to choose and use, the health benefits and show the kiddos what it looks like. Then we get to taste the item. I talk with them about not using words like "ew, gross and yuck" because those are negative words and may discourage our school friends not to try it a new yummy and delicious food.
This has made me realize, I need to stop using these words too - especially as adults.
How can we expect kids and adults and all people to explore new foods if dietitians use such negative words surrounding food?
Everyone has different taste buds and different food experiences. As a dietitian, I have my own food preferences but I also realize I need to retry many foods I used to say "yuck" to and be mindful of pushing my own food opinions onto others. Because someones yuck may be someones yum and vice versa.
It doesn't matter what age you are, toss out the word yuck - and embrace a little more yum in your life.
#embracethehellyeah
~AE
Posted by Anne Elizabeth at 2:13 PM No comments: